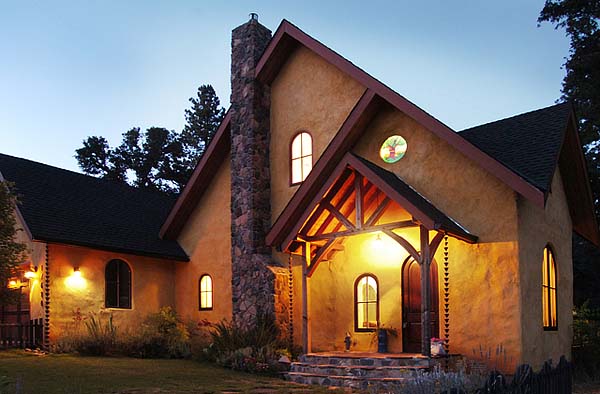 For thousands of years people have been making their homes from various adobe methods.

An adobe house is any kind of house that is made of clay mixed with straw and earth. For all that time, farmers have also made hay and straw more manageable by tying them together into big bundles called “bales.” Between the 1850’s and the 1930’s, machines were invented to bale the straw into neat uniformed blocks. These blocks are what most people will think about when you refer to a modern hay bale or straw bale. Although straw has been used in construction for thousands of years, towards the end of the 19th century, a schoolhouse was built in Nebraska using modern straw bales that were made in a mechanical straw baler. Although it is still considered to be an uncommon alternative to traditional building materials, the popularity of straw bale houses is on the rise. One of the reasons for this is because many people see straw bale houses as a way that they could build themselves a home in a DIY sort of way. After a lot a research and some workshop tutorials, many people end up doing a great deal of the work on their own house. The labor savings and the cost of materials can make straw bale homes very affordable. There are a number of factors that could affect the final cost but some homeowners/builders end up with a finished house for as low as $30,000.

There are other benefits to building a straw bale house other than just cost. The houses made from straw bales will have walls that are no less than 18 inches thick. This means that your house will have excellent insulation. You will have walls that keep the heat out in the summer, the cold out in the winter. This level of insulation will also keep sound from bleeding in or out of your house.

There is also a green aspect to these houses. The materials used are not harmful like asbestos or a hundred other things commonly used home construction. These houses will last a long time but when they finally do get demolished, the straw material is completely biodegradable. There are however, some problematic elements to these great houses. For one thing, the oppressive government that runs this country demands that we get building permits to build something on our own property. The necessary paperwork may be more difficult to get through depending on where you live and the laws of that area.

One of the biggest problems is the plumbing. There isn’t really any risk of the bales of straw to catch fire because they are packed so tight. But mold or other forms of water damage are very serious problems for straw bale houses. Because of this, you do not want to build any of the plumbing into the walls around the kitchen unless you make special water safe areas or “water isolation area”. These areas would be sections of the wall that are NOT made from straw bales. The kitchen in your home may be an area that has one or two of these water safe areas due to the sink, dishwasher and refrigerator. So some people decide to add an inner layer of traditional walls or at least some kind of wood studs in the kitchen area to help with the water safe aspect and to make it possible to hang wall cabinets. In general they say that straw bale houses are not good for areas with a lot of humidity or excessive rain. The look and all the benefits of a straw bale house are truly great but there are a number of people who are not interested in them for one reason or another. It’s not a concept that works for everyone. But if you are into the kind of home you can make with a straw bale house, then you can certainly save yourself a lot of money.

On a slightly unrelated note: If you really wanted to save a lot of money building your own home then you could do what this enthusiastic Tolken fan did. You could dig a hobbit house and make it livable for about $5000!”