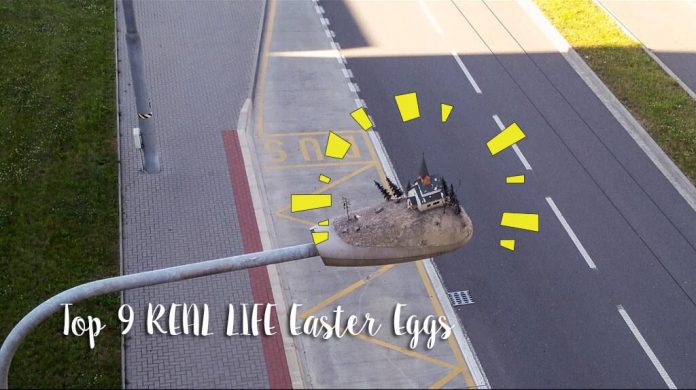 From hidden humor in product advertising to poignant artistic installations in outlandish places, the world around us contains amazing rewards for the discerning eye.

Ratoncito Pérez, Spain’s answer for the Tooth Fairy you may be familiar with, is traditionally well known for his many clever tricks to mislead and outmaneuver cats during his pursuit of teeth. Reddit user ZurgTS visited his dentist and spotted the home of Ratoncito Pérez on a nearby wall. A very cute treat for children (and full grown adult children) in the office for cleanings!

We also learned some other names for the cute mouse in different nations:

Ahead of the release of the first Ant-Man movie in 2015, promotions like this one were playfully placed around major cities in order to create viral interest in the film. Marvel hired artist Slinkachu to create this piece that was staged in London. Apparently, all of the figures were modeled using railroad miniatures.

The Room of a Small Astronomer Street Art

Russian street artist Ivan Grey created this installation, entitled The Room of a Small Astronomer in Nizhny Novgorod. Sadly, it was reported destroyed by hooligans in August of 2017. Before its destruction, it made the small town famous across Russia and drew a great deal of tourist traffic to the modest intersection of Semashko and Bolshaya Pecherskaya streets.

Upon learning of its destruction, its creator joked that his astronomer could not survive the Airborne Forces Day. The installation only took him about 2 days to create, with materials already at hand. He intends to create more art around the area in the future, perhaps more resistant to the elements and vandals.

The city of Ostravia in the Czech Republic is host to the most modest and small church you could possibly conceive of. Placed atop a lamp post, it is best enjoyed from the perspective of this photographer–walkin on a bridge that crosses the visible road.

One wonders how they got it on there! One reddit user posited that it may have had gorilla glue along its bottom and was afixed via fishing line from the bridge. Seems plausible!

Though from the ground you’d never know it, Parkland High School in Allentown, PA bears a striking resemblance to Han Solo’s famed Millennium Falcon spacecraft from the Star Wars franchise.

While the architect behind the school’s construction is a Star Wars fan, this uncanny similarity is apparently a complete accident. When asked about the strange parity between their shapes, Dean Beeninga (the architect) only laughed. “What I like about the design is it’s efficient like the spaceship,” he said. “It looks pretty streamlined.”

Reddit user elskeguf found this extremely tiny newspaper inspired by the Harry Potter series of JK Rowling’s. Pasted to the floor of the international terminal at Sydney Airport near the entrance to the last check-in counters, the miniature Daily Prophet warns that “He Who Must Not Be Named Returns” in a cryptic special edition.

If you happen to be traveling through the terminal at Sydney and want to keep an eye out for this cute little gem, happy hunting!

Once you see it, it’s glaringly obvious. But it’s still a pretty amazing piece of marketing. Interesting, too, is the fact that in the name of Toblerone is the name of the city Berne, whose symbol is… ready for it? A bear. All around very cool design, and one easter egg that we aren’t too embarrassed to say was right in front of OUR eyes for years without noticing.

Apparently effects pedals manufacturer EHX has been sneaking fun little Easter Eggs into their products for quite some time. Reddit user eifersucht12a posted this discovery that, if you aren’t familiar, is a fun reference to a popular Key and Peele skit.

In the 1980s, while the two west towers of the National Cathedral in Washington D.C. were under construction, the Cathedral held a competition to design a carving on it for children. The third-place winner, Christopher Rader, submitted a drawing of Star Wars’ Darth Vader. And that, as they say, was history.

Interesting bit of trivia: The word “gargoyle” is actually only the correct terminology when the statue is used as a water spout. Otherwise, the right term is a “grotesque”, “chimera”, or “boss”.