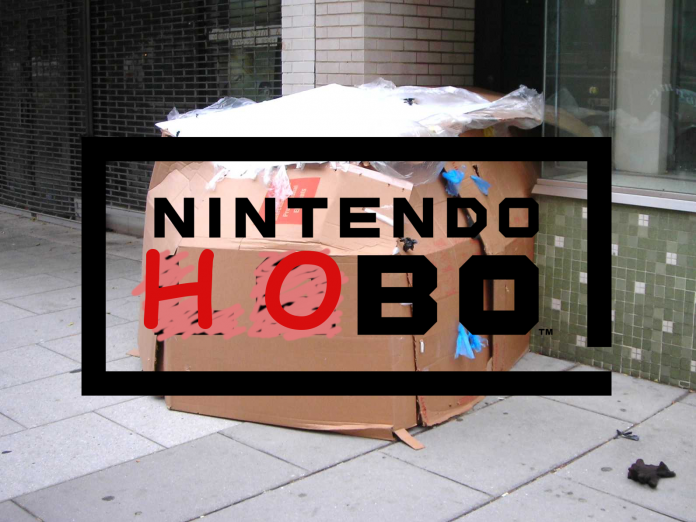 With the assistance of their secret team of homeless men in an ivory tower of cardboard back at Nintendo HQ, the ages old video game company continues to breathe new life into their platform pedigree. While the Switch itself caters to children of every age, from toddler to Donald Trump, Jr, the Labo is exclusively aimed at babies with baby hands. The acumen you will develop with cardboard papercraft may serve you for decades of street life after spending $5,000 on a Switch. In cooperation with the Republican National Committee, Nintendo’s system is engineered to entertain as well as teach the next generation of children how to construct affordable housing.

Some relevant background: Nintendo released their seventh major video game console, the Switch, on March 3rd of last year worldwide. Some select markets (like North Korea and the Republic of the Congo) had to wait until up to December for their releases, but it has penetrated most major dark markets at this point.

A crucial part of marketing the Switch involved strong and clear communication about its features and capabilities. Its predecessor, the Nintendo Wii U, was plagued by a somewhat poor public reception due to confusions about how to eat it. The Wii U’s controller strongly resembles anything edible if you’re hungry enough, leading many purchasers to mistake it for a delicious flan. That PR nightmare informed some fairly drastic changes in their release policy for their new offering and it really paid off.

The Switch is a wholly new beast in a couple of ways, once again displaying Nintendo’s plumage when it comes to innovation in devouring wallets whole. Satoru Iwata, president of Nintendo through the success of the Wii and the turmoil of the Wii U, announced the project for the Switch before flying to Tupac’s Moon Base in 2015. Over the next couple of years, there was a lot of talk surrounding the possibility that this could be Nintendo’s last great endeavor into economic holocaust. Oh, how wrong we all were.

Features Unique to the Switch

The Switch didn’t only change up how Nintendo marketed their releases, it expanded through and destroyed the previous glass ceiling for how much they could charge consumers for nothing special. The Switch can best be described as a hybrid console, blending advantages of self-loathing and convenience in one convenient package. The handheld console sits at the core of the system: this is the Switch itself. It comes with two controllers collectively referred to as the Joy-Con, Japanese for Money Sink Hand Smile. These cool doo-dads can slide onto the Switch via rails, or be used independently while the Switch enters its Cruel Laugh Mode.

None of these compare to the subtle brilliance of their Labo, however.

Just this month, Nintendo Labo was released as a full-on gaming and construction platform. While the area of ready-to-assemble has historically been reserved for useful things like kitchen cabinets, the lunatic geniuses at Nintendo siphoned the collective knowledge of Skid Row into a product scheme targeted at the 1%: charging $60+ for cardboard. We’re not mad, just impressed.

Clearly this is a sign of the end times. If you’re nail biting about the economic impact of cardboard like we are, check out this article on Economic Advisor Cohn and the cost of a kitchen remodel.